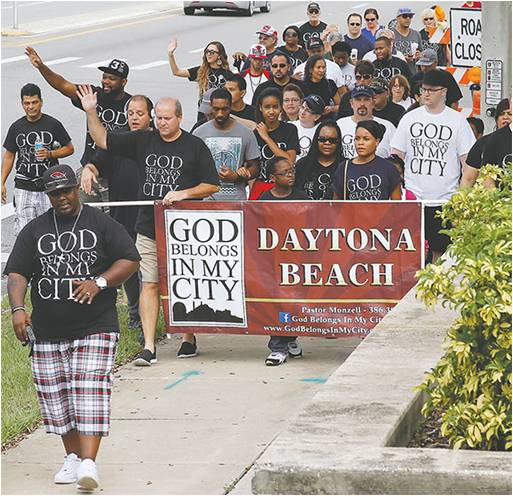 “God Belongs in My City” united more than 400 area residents representing varied races and ethnicity. Clad in signature T-shirts and carrying symbolic signage, they convened on Daytona Beach City Hall, marched through town, and played host to a spiritual movement that united the masses.

“God Belongs in Our City” (GBIC) is a worldwide movement led locally by Pastor Monzell Ford of Kingdom Minded Worldwide Ministries in Daytona Beach. He was joined on the City Hall platform by Mayor Derrick Henry and uniting with 25 local ministers in the community.

Area residents pray during the God Belongs in My City event in Daytona Beach.
(PHOTOS BY DUANE C. FERNANDEZ SR./HARDNOTTSPHOTOGRAPHY.COM)

In 80 cities
“God Belongs in My City” is not only a worldwide ‘movement,’ it’s our declaration of faith,” said Ford. “As Christ came and changed the world, we as Christians ought to impact our city now. There is a call to fearlessly rise up as one and not collapse under the waves of this world. We are commissioned to carry forth the gospel of salvation,” he added.

Currently, the national movement has 80 host cities. Ford launched his Daytona initiative in 2014 as an extension of his ongoing work in street ministry and urban evangelism. Magga Products, Inc. of Holly Hill served as the lead sponsor to help defray the $2,000 cost for T-shirts, water, signage, etc.

According to Ford, this year’s event required four months of planning and the collaboration of other ministries to effectively host a successful movement.

Planning for 2016
Schedule challenges and an unwillingness to join forces were obstacles, but not a deterrent for Ford. He’s already geared up and ready for next year.

The 2016 prayer walk is set for Oct. 1, 2016, and beginning in January 2016, a GBIMC Daytona Committee will be meeting monthly for rallies and planning meetings.

“We are the voice of this generation making the call to the people of God to rise up and proclaim the name that is above all names, Jesus Christ,” said Ford.